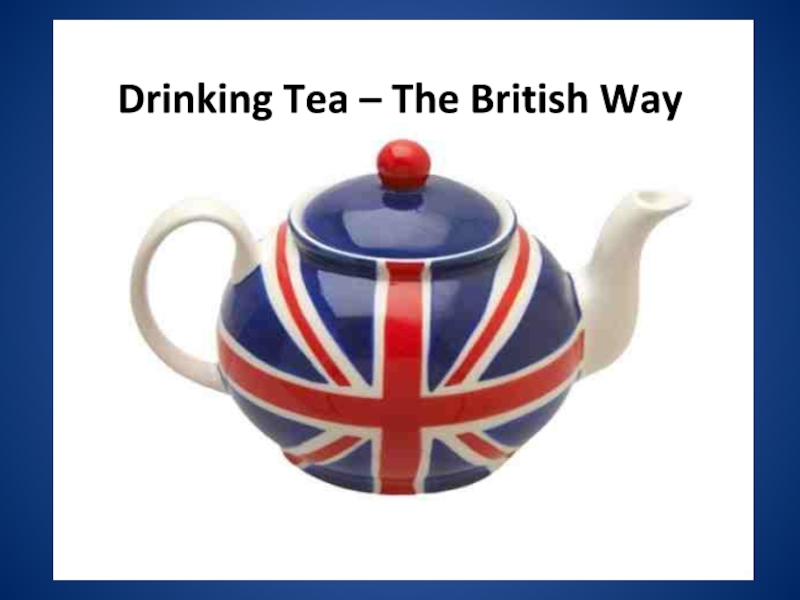 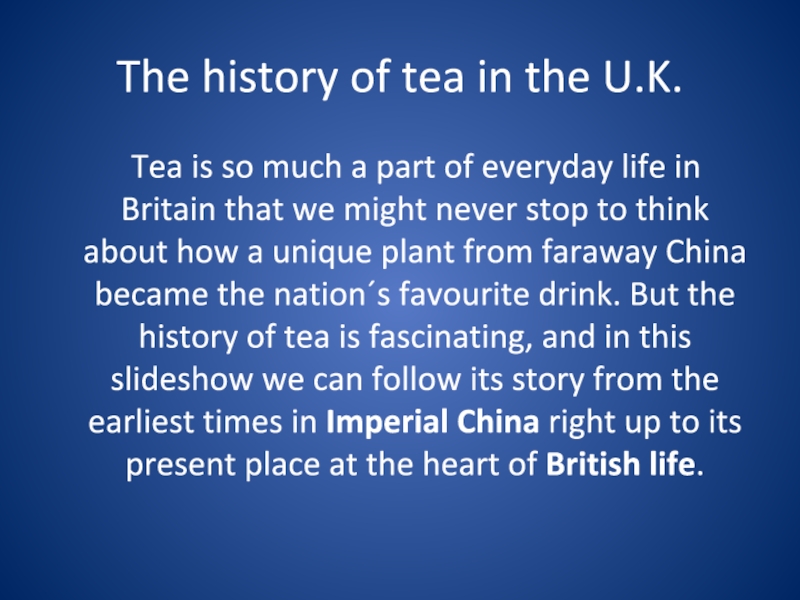 The history of tea in the U.K.

Tea is so much a part of everyday life in Britain that we might never stop to think about how a unique plant from faraway China became the nation´s favourite drink. But the history of tea is fascinating, and in this slideshow we can follow its story from the earliest times in Imperial China right up to its present place at the heart of British life. 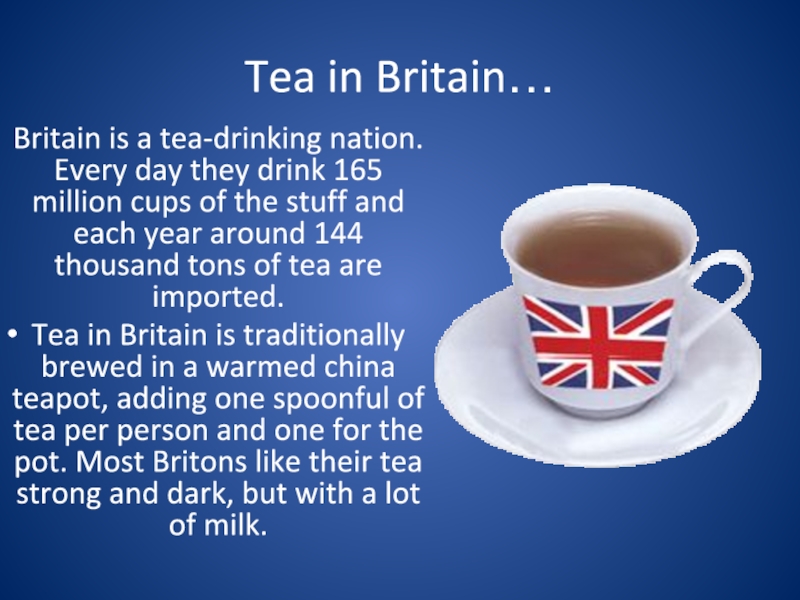 Britain is a tea-drinking nation. Every day they drink 165 million cups of the stuff and each year around 144 thousand tons of tea are imported.
Tea in Britain is traditionally brewed in a warmed china teapot, adding one spoonful of tea per person and one for the pot. Most Britons like their tea strong and dark, but with a lot of milk. 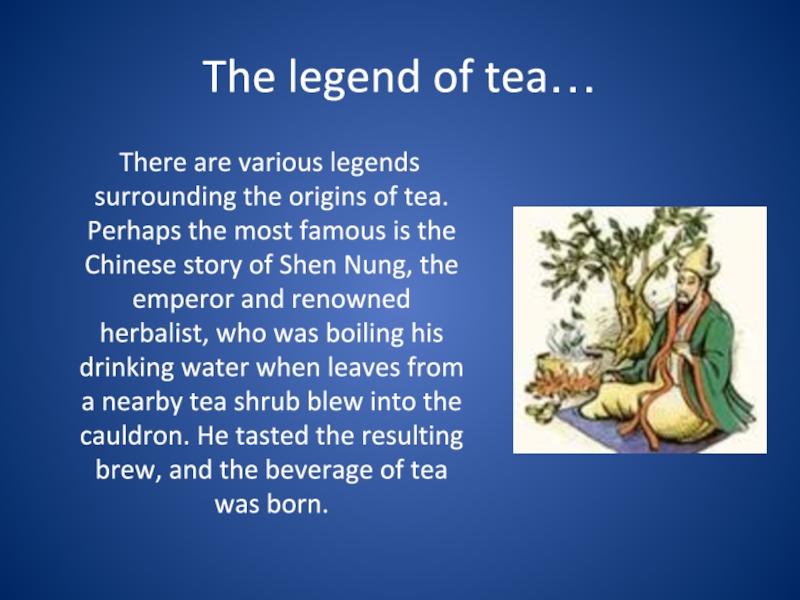 The legend of tea…

There are various legends surrounding the origins of tea. Perhaps the most famous is the Chinese story of Shen Nung, the emperor and renowned herbalist, who was boiling his drinking water when leaves from a nearby tea shrub blew into the cauldron. He tasted the resulting brew, and the beverage of tea was born. 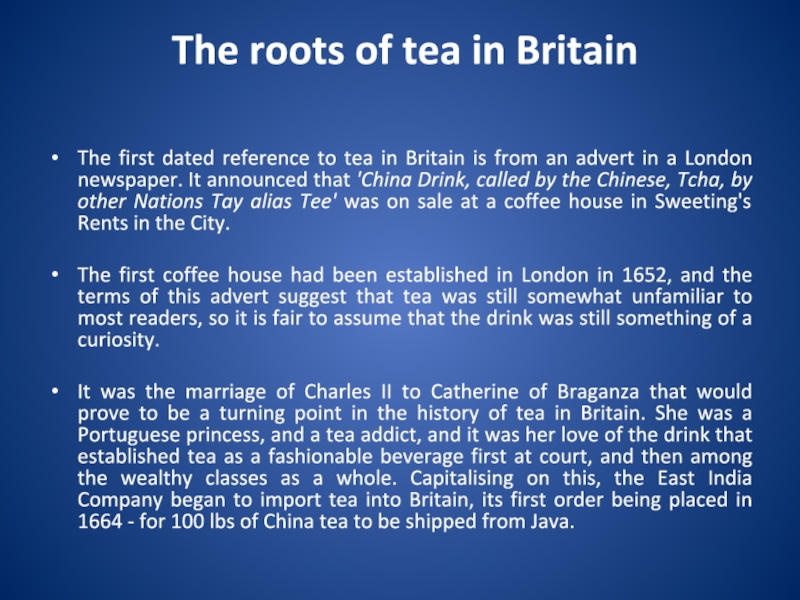 The roots of tea in Britain

The first dated reference to tea in Britain is from an advert in a London newspaper. It announced that 'China Drink, called by the Chinese, Tcha, by other Nations Tay alias Tee' was on sale at a coffee house in Sweeting's Rents in the City.

The first coffee house had been established in London in 1652, and the terms of this advert suggest that tea was still somewhat unfamiliar to most readers, so it is fair to assume that the drink was still something of a curiosity.

It was the marriage of Charles II to Catherine of Braganza that would prove to be a turning point in the history of tea in Britain. She was a Portuguese princess, and a tea addict, and it was her love of the drink that established tea as a fashionable beverage first at court, and then among the wealthy classes as a whole. Capitalising on this, the East India Company began to import tea into Britain, its first order being placed in 1664 - for 100 lbs of China tea to be shipped from Java. 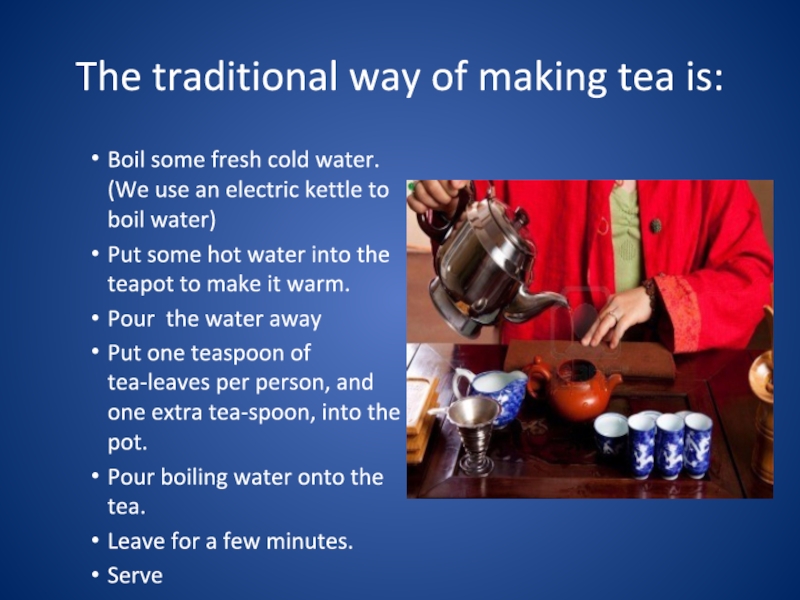 The traditional way of making tea is:

Boil some fresh cold water. (We use an electric kettle to boil water)
Put some hot water into the teapot to make it warm.
Pour the water away
Put one teaspoon of tea-leaves per person, and one extra tea-spoon, into the pot.
Pour boiling water onto the tea.
Leave for a few minutes.
Serve 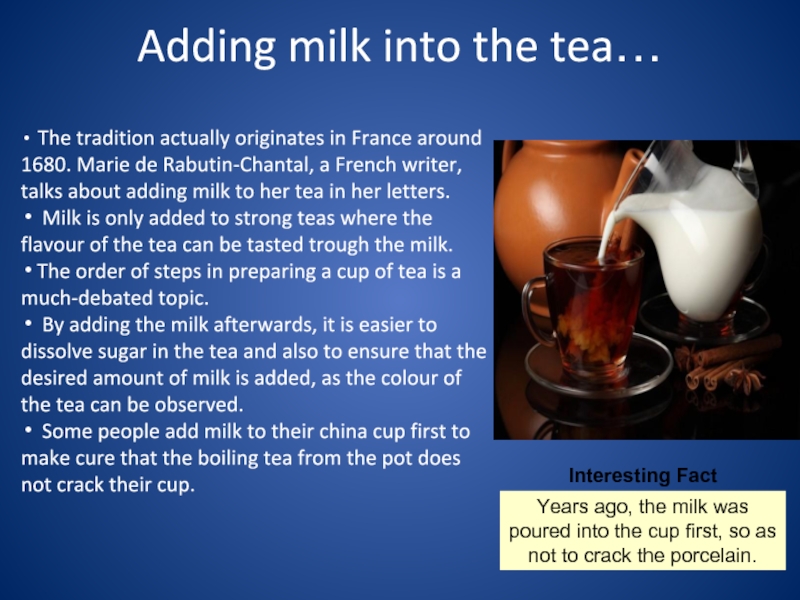 Adding milk into the tea…

The tradition actually originates in France around 1680. Marie de Rabutin-Chantal, a French writer, talks about adding milk to her tea in her letters.
Milk is only added to strong teas where the flavour of the tea can be tasted trough the milk.
The order of steps in preparing a cup of tea is a much-debated topic.
By adding the milk afterwards, it is easier to dissolve sugar in the tea and also to ensure that the desired amount of milk is added, as the colour of the tea can be observed.
Some people add milk to their china cup first to make cure that the boiling tea from the pot does not crack their cup. 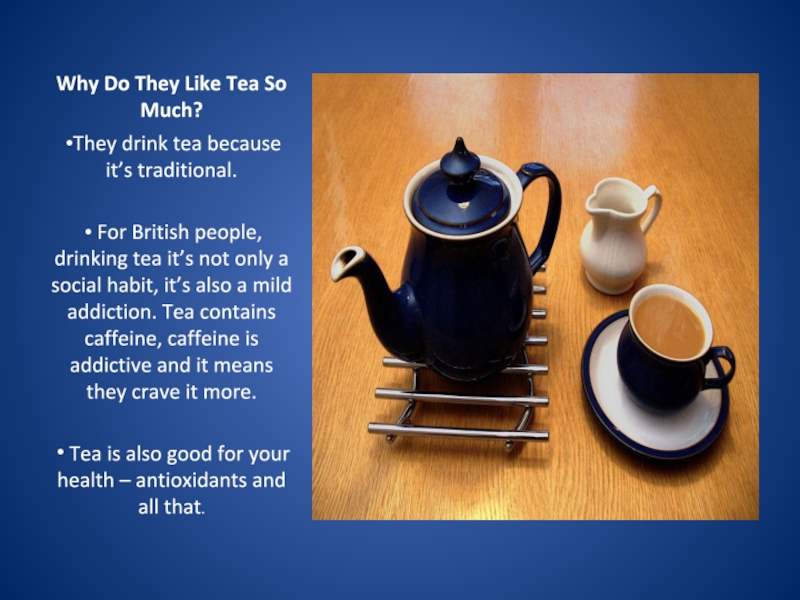 They drink tea because it’s traditional.

For British people, drinking tea it’s not only a social habit, it’s also a mild addiction. Tea contains caffeine, caffeine is addictive and it means they crave it more.

Tea is also good for your health – antioxidants and all that. 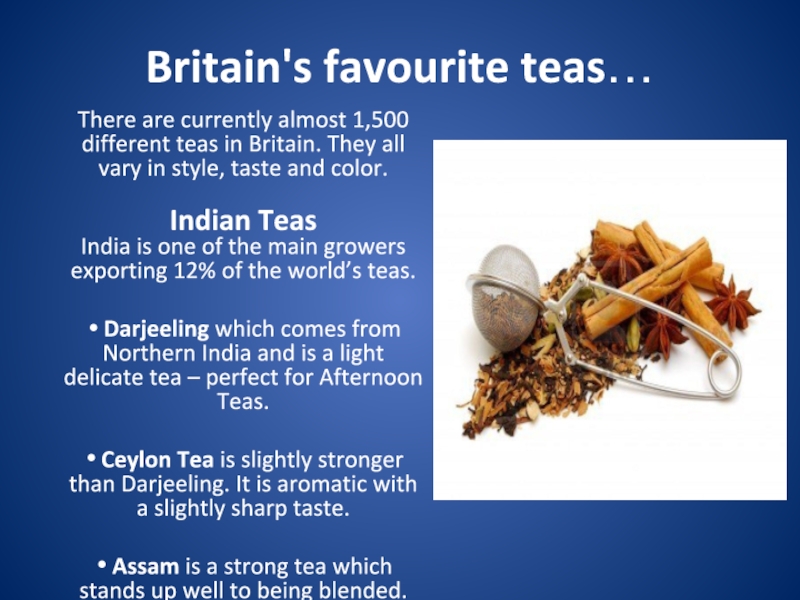 There are currently almost 1,500 different teas in Britain. They all vary in style, taste and color. Indian Teas India is one of the main growers exporting 12% of the world’s teas.

Darjeeling which comes from Northern India and is a light delicate tea – perfect for Afternoon Teas.

Ceylon Tea is slightly stronger than Darjeeling. It is aromatic with a slightly sharp taste.

Assam is a strong tea which stands up well to being blended. 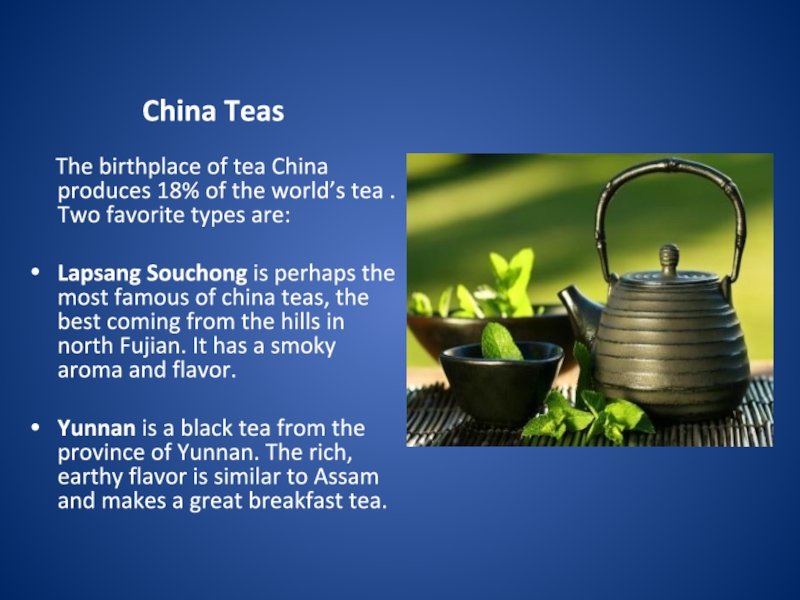 China Teas
The birthplace of tea China produces 18% of the world’s tea . Two favorite types are:

Lapsang Souchong is perhaps the most famous of china teas, the best coming from the hills in north Fujian. It has a smoky aroma and flavor.

Yunnan is a black tea from the province of Yunnan. The rich, earthy flavor is similar to Assam and makes a great breakfast tea. 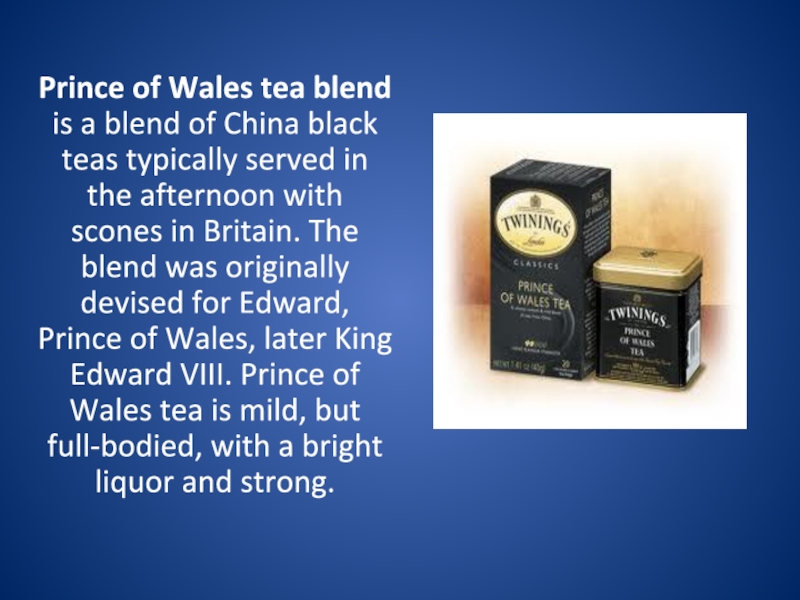 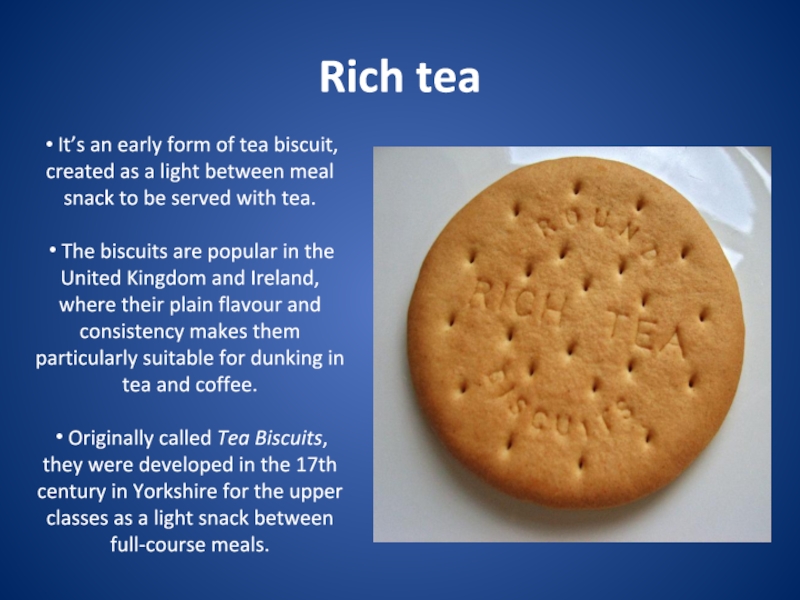 It’s an early form of tea biscuit, created as a light between meal snack to be served with tea.

The biscuits are popular in the United Kingdom and Ireland, where their plain flavour and consistency makes them particularly suitable for dunking in tea and coffee.

Originally called Tea Biscuits, they were developed in the 17th century in Yorkshire for the upper classes as a light snack between full-course meals. 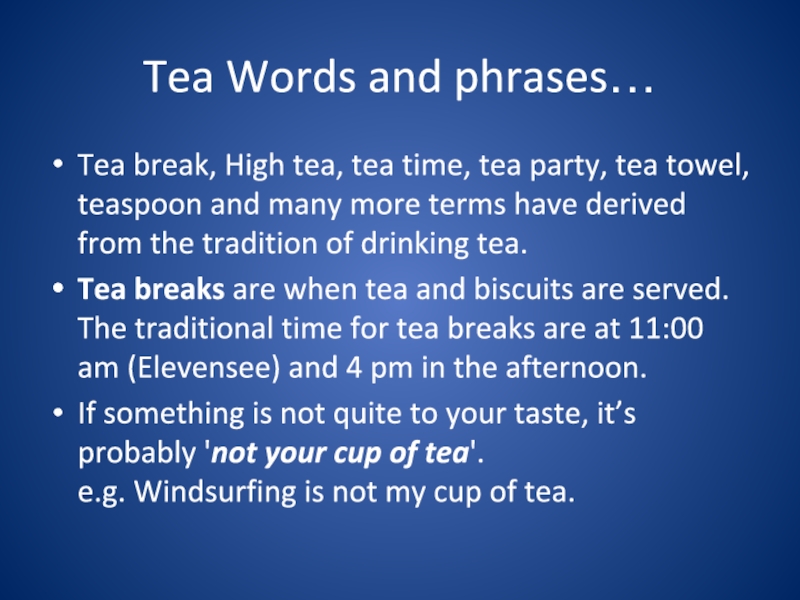 Tea break, High tea, tea time, tea party, tea towel, teaspoon and many more terms have derived from the tradition of drinking tea.
Tea breaks are when tea and biscuits are served. The traditional time for tea breaks are at 11:00 am (Elevensee) and 4 pm in the afternoon.
If something is not quite to your taste, it’s probably 'not your cup of tea'. e.g. Windsurfing is not my cup of tea. 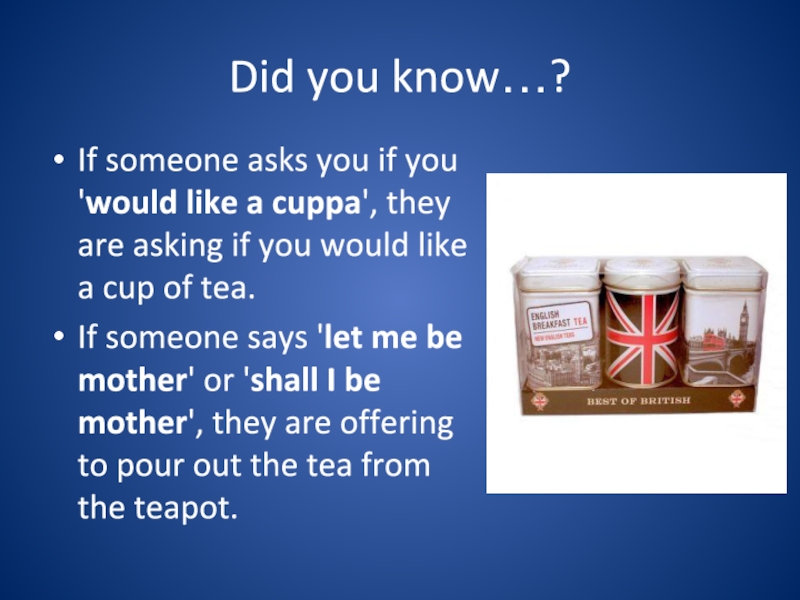 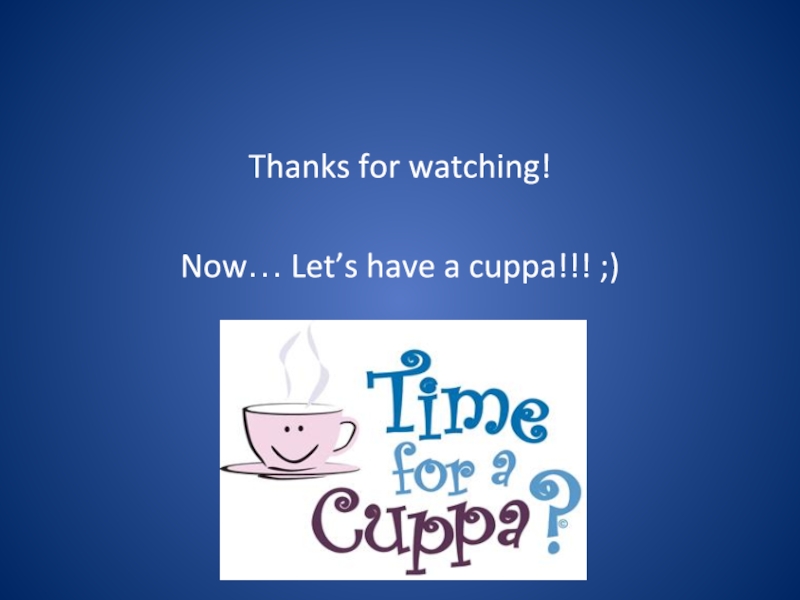 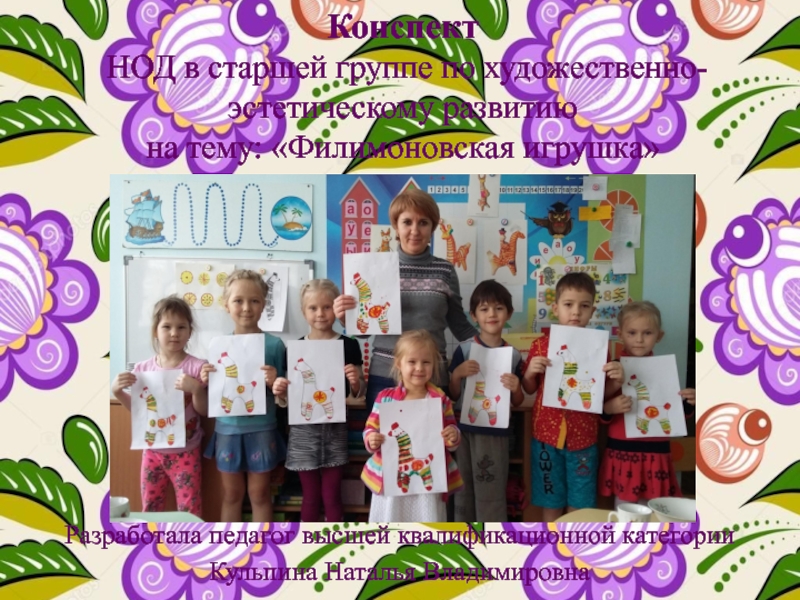 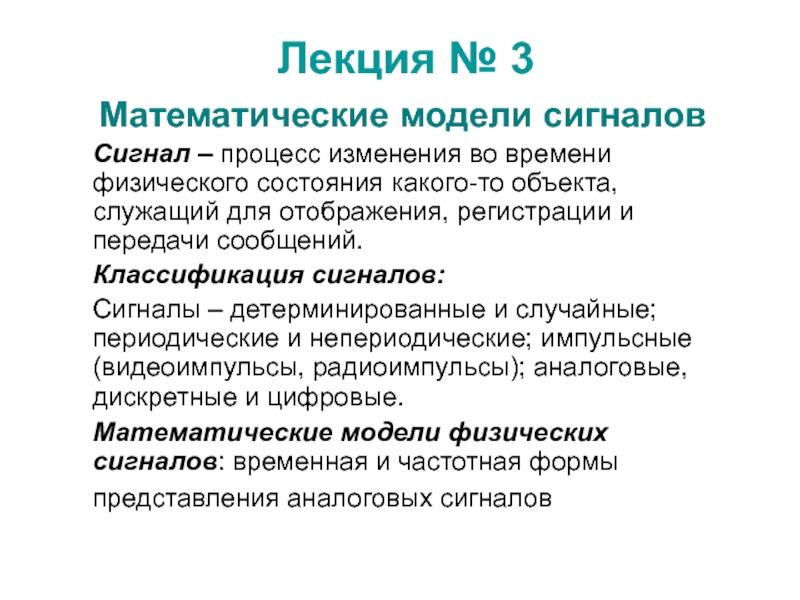 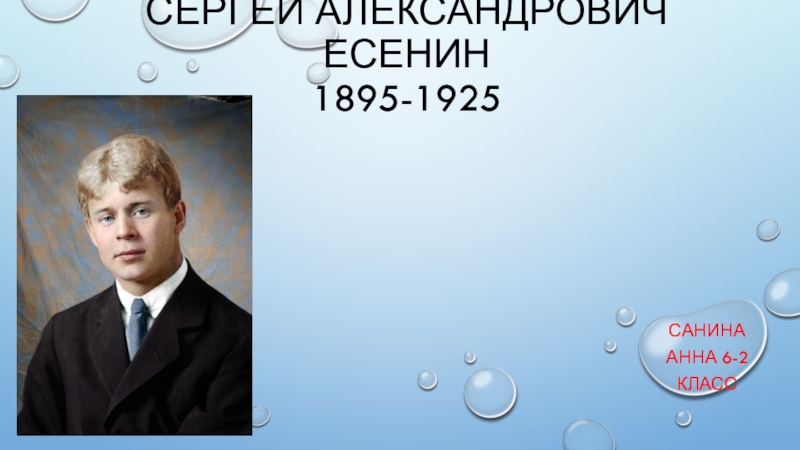 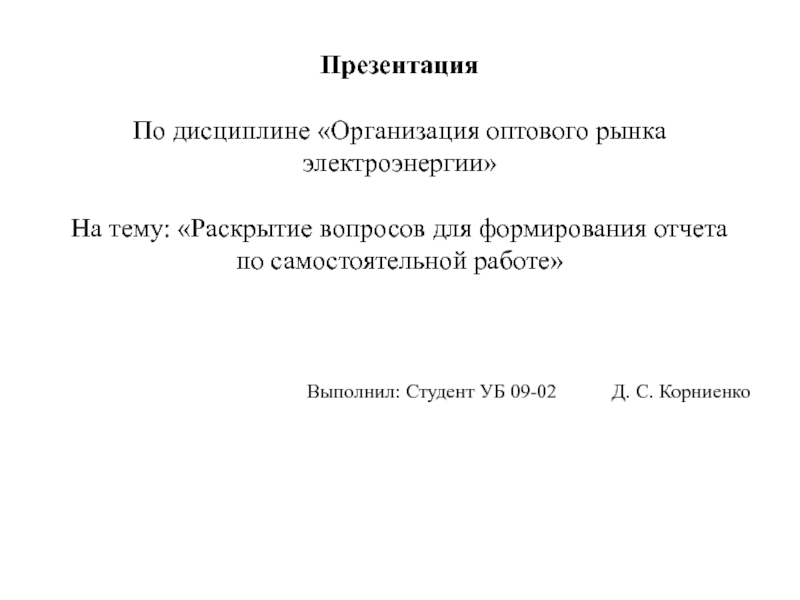 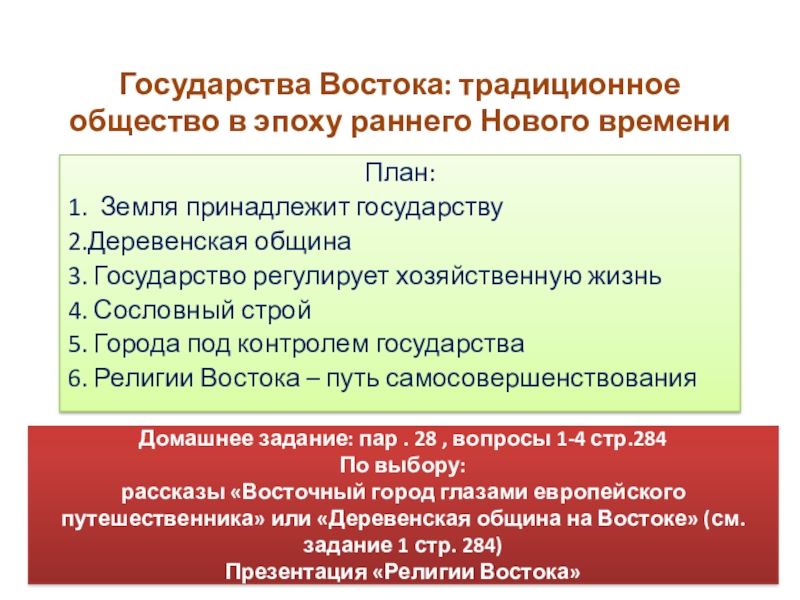 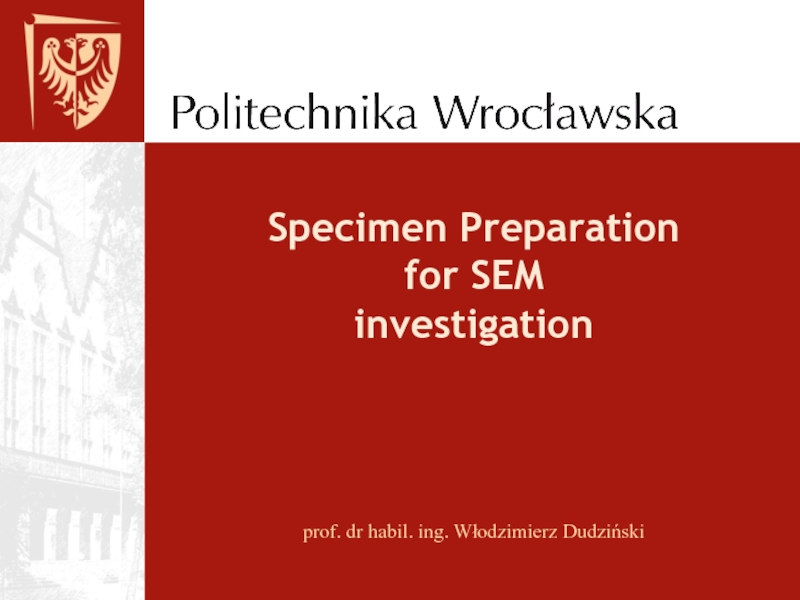 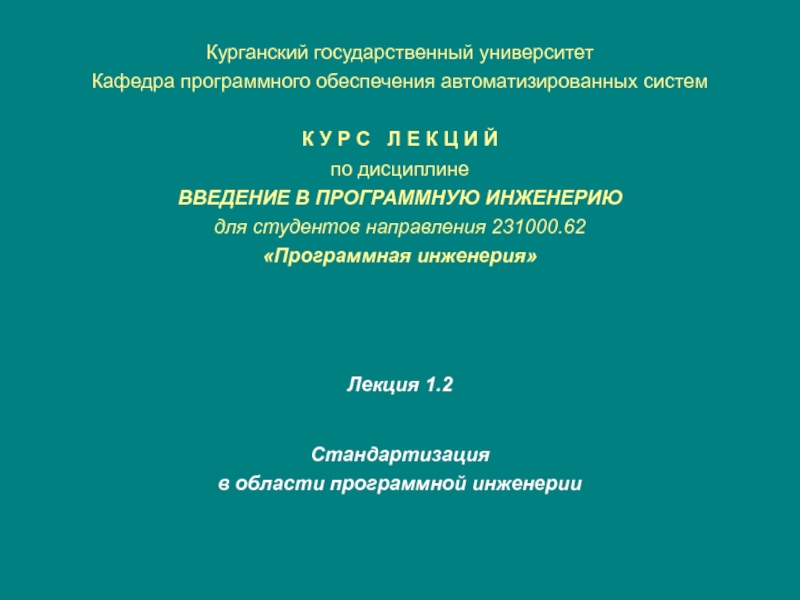 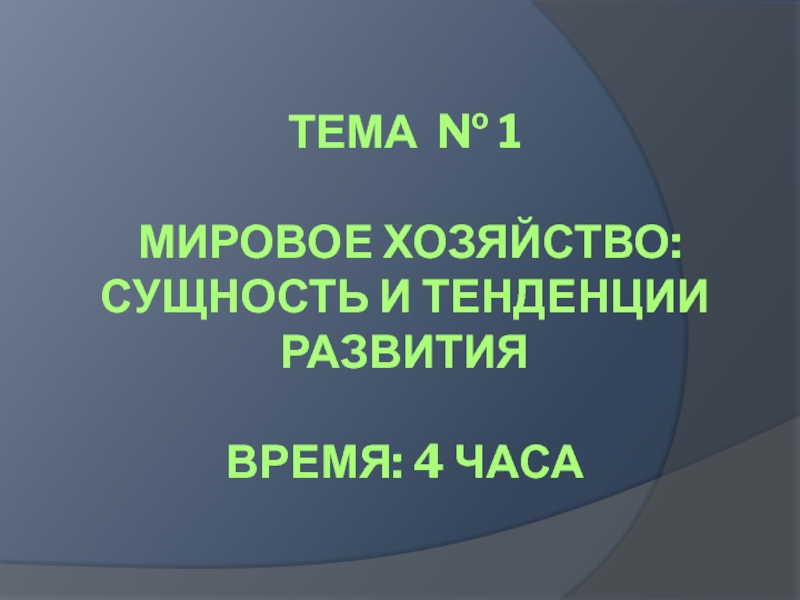