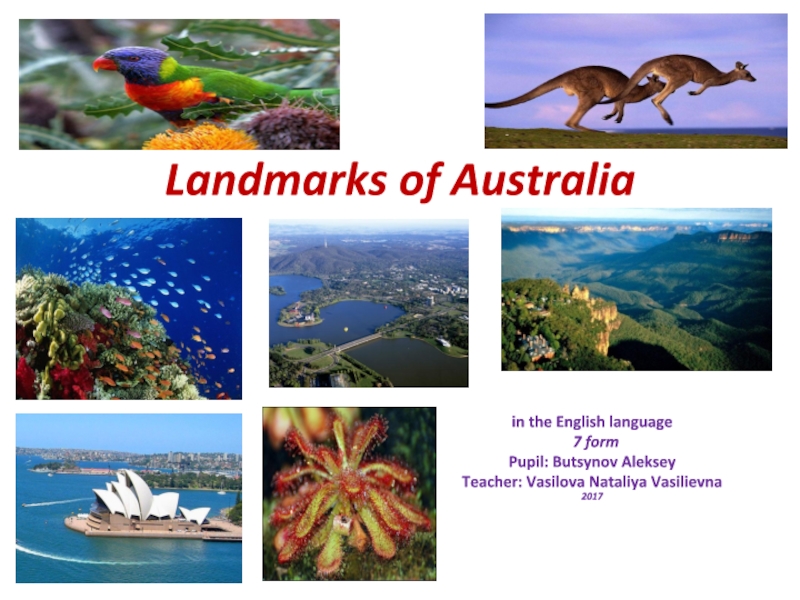 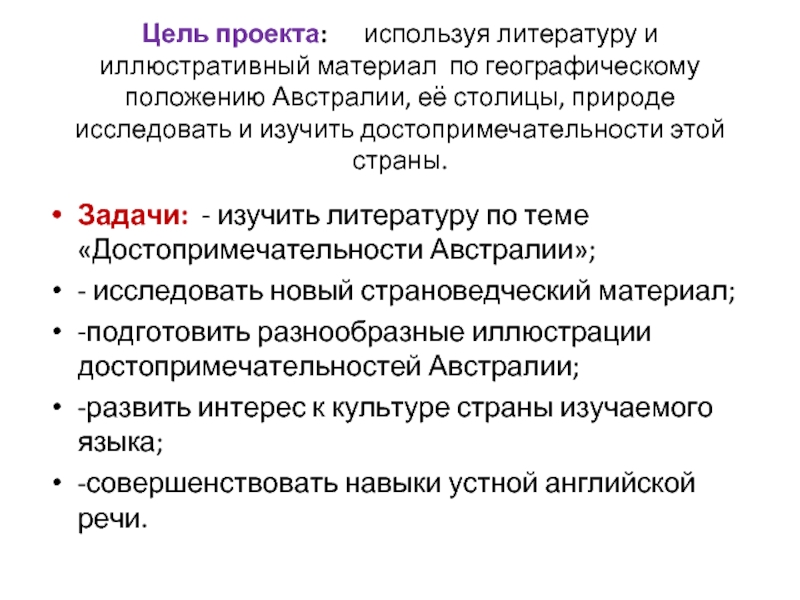 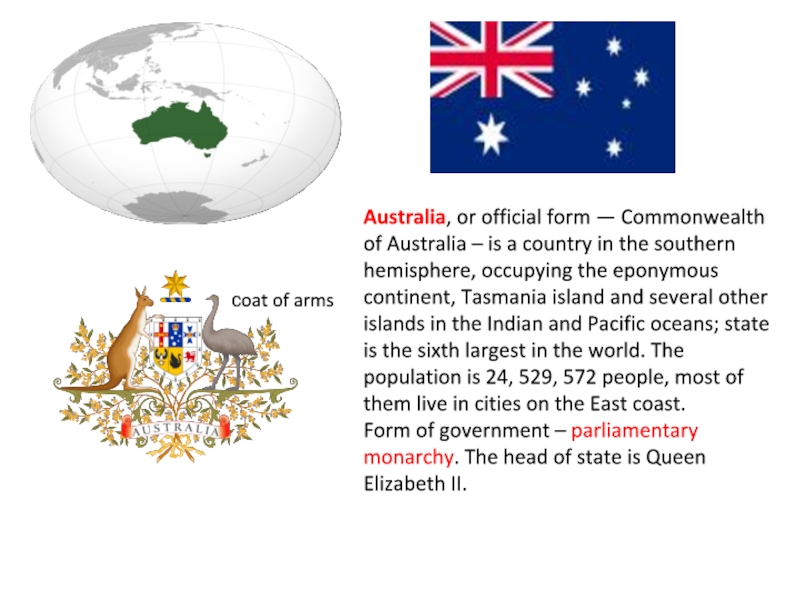 Australia, or official form — Commonwealth of Australia – is a country in the southern hemisphere, occupying the eponymous continent, Tasmania island and several other islands in the Indian and Pacific oceans; state is the sixth largest in the world. The population is 24, 529, 572 people, most of them live in cities on the East coast.
Form of government – parliamentary monarchy. The head of state is Queen Elizabeth II. 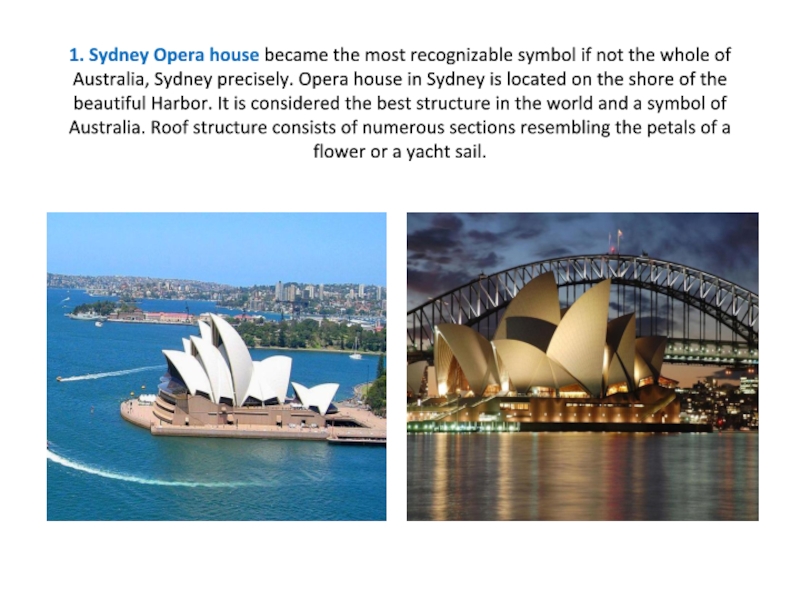 1. Sydney Opera house became the most recognizable symbol if not the whole of Australia, Sydney precisely. Opera house in Sydney is located on the shore of the beautiful Harbor. It is considered the best structure in the world and a symbol of Australia. Roof structure consists of numerous sections resembling the petals of a flower or a yacht sail. 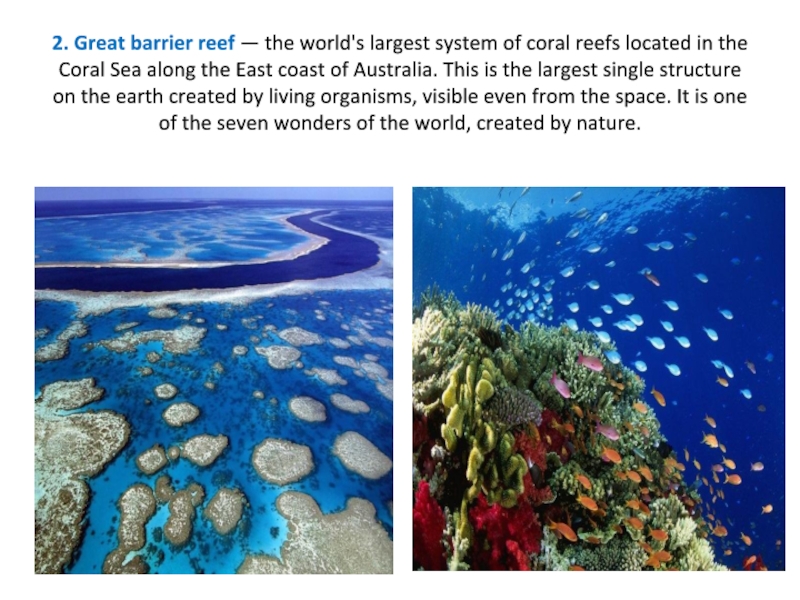 2. Great barrier reef — the world's largest system of coral reefs located in the Coral Sea along the East coast of Australia. This is the largest single structure on the earth created by living organisms, visible even from the space. It is one of the seven wonders of the world, created by nature. 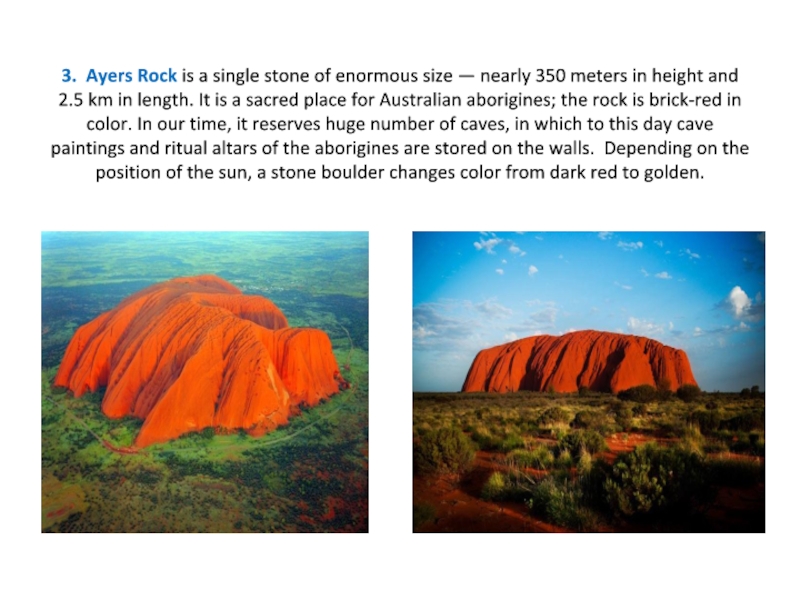 3. Ayers Rock is a single stone of enormous size — nearly 350 meters in height and 2.5 km in length. It is a sacred place for Australian aborigines; the rock is brick-red in color. In our time, it reserves huge number of caves, in which to this day cave paintings and ritual altars of the aborigines are stored on the walls. Depending on the position of the sun, a stone boulder changes color from dark red to golden. 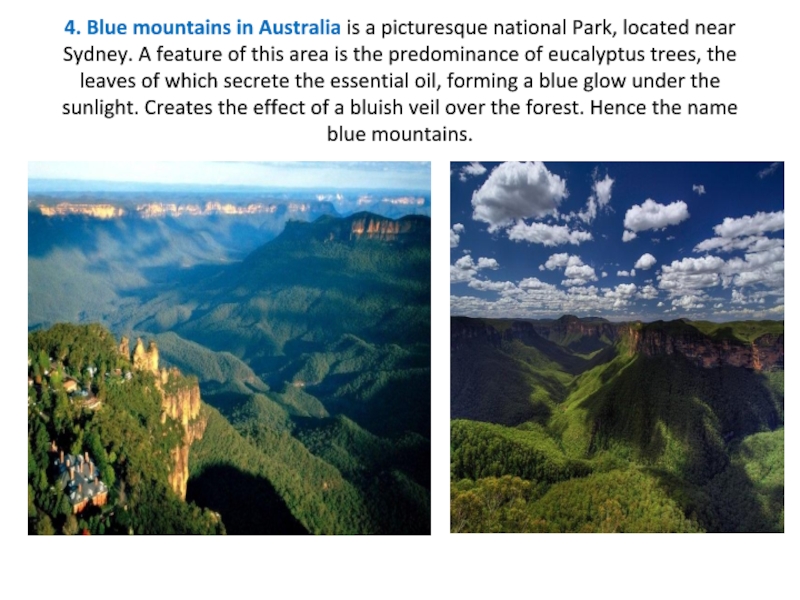 4. Blue mountains in Australia is a picturesque national Park, located near Sydney. A feature of this area is the predominance of eucalyptus trees, the leaves of which secrete the essential oil, forming a blue glow under the sunlight. Creates the effect of a bluish veil over the forest. Hence the name blue mountains. 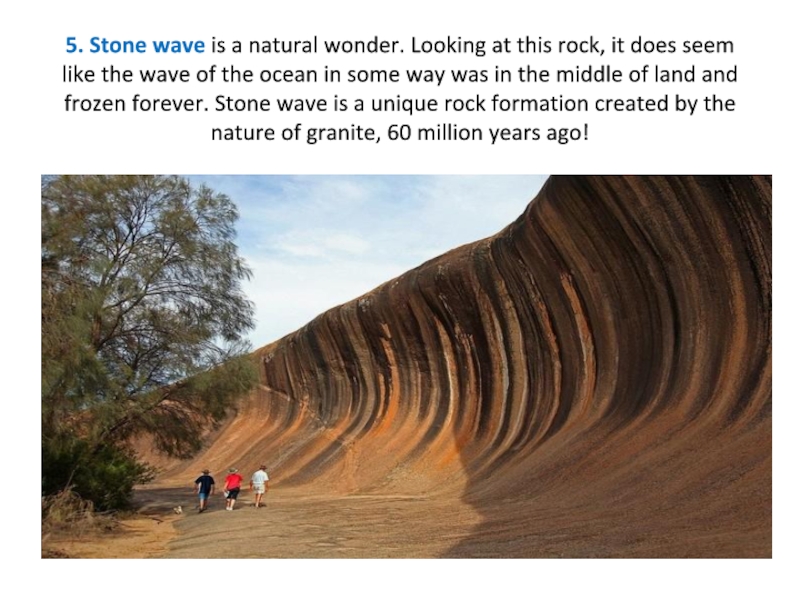 5. Stone wave is a natural wonder. Looking at this rock, it does seem like the wave of the ocean in some way was in the middle of land and frozen forever. Stone wave is a unique rock formation created by the nature of granite, 60 million years ago! 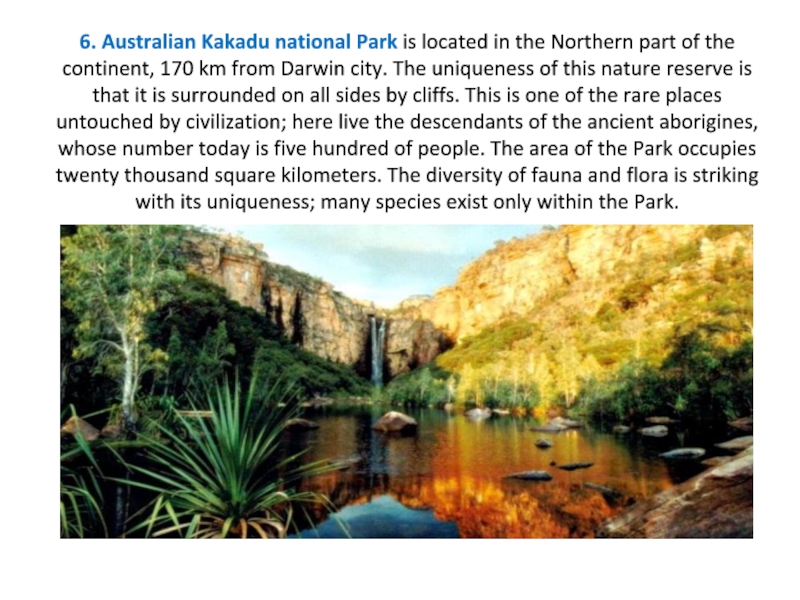 6. Australian Kakadu national Park is located in the Northern part of the continent, 170 km from Darwin city. The uniqueness of this nature reserve is that it is surrounded on all sides by cliffs. This is one of the rare places untouched by civilization; here live the descendants of the ancient aborigines, whose number today is five hundred of people. The area of the Park occupies twenty thousand square kilometers. The diversity of fauna and flora is striking with its uniqueness; many species exist only within the Park. 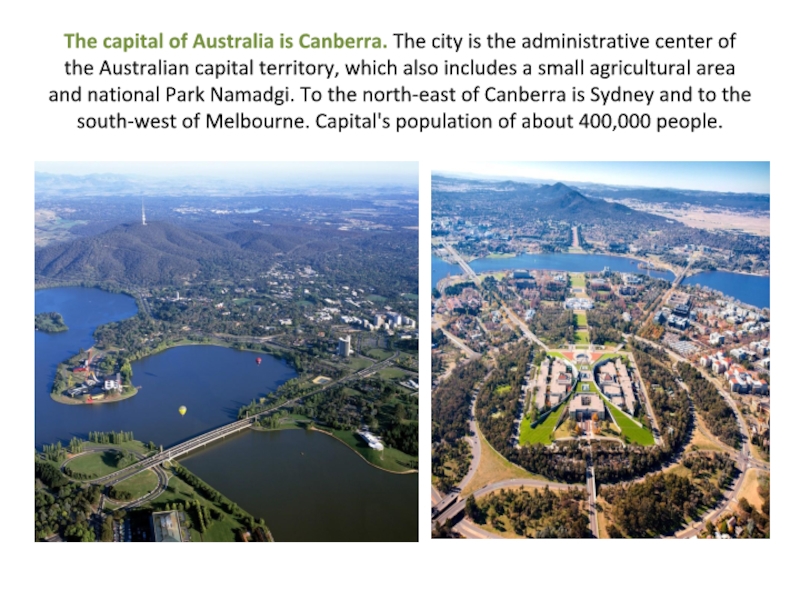 The capital of Australia is Canberra. The city is the administrative center of the Australian capital territory, which also includes a small agricultural area and national Park Namadgi. To the north-east of Canberra is Sydney and to the south-west of Melbourne. Capital's population of about 400,000 people. 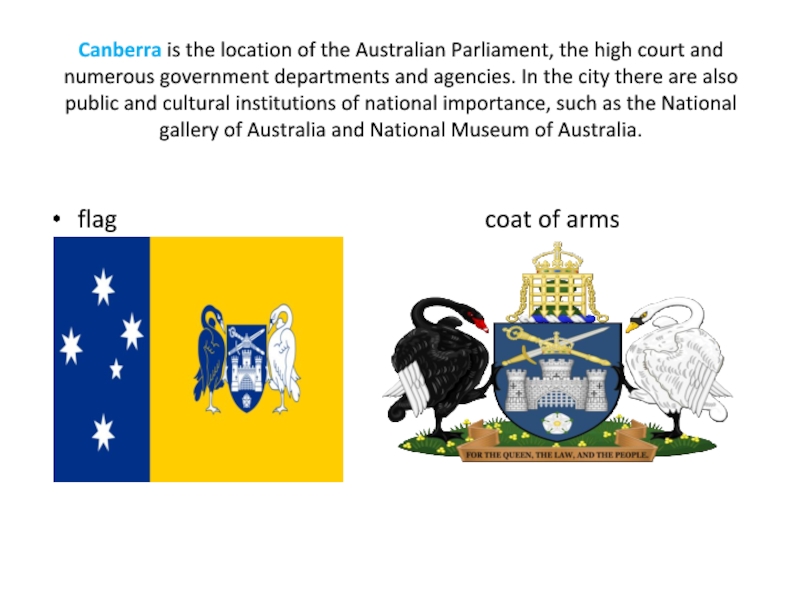 Canberra is the location of the Australian Parliament, the high court and numerous government departments and agencies. In the city there are also public and cultural institutions of national importance, such as the National gallery of Australia and National Museum of Australia. 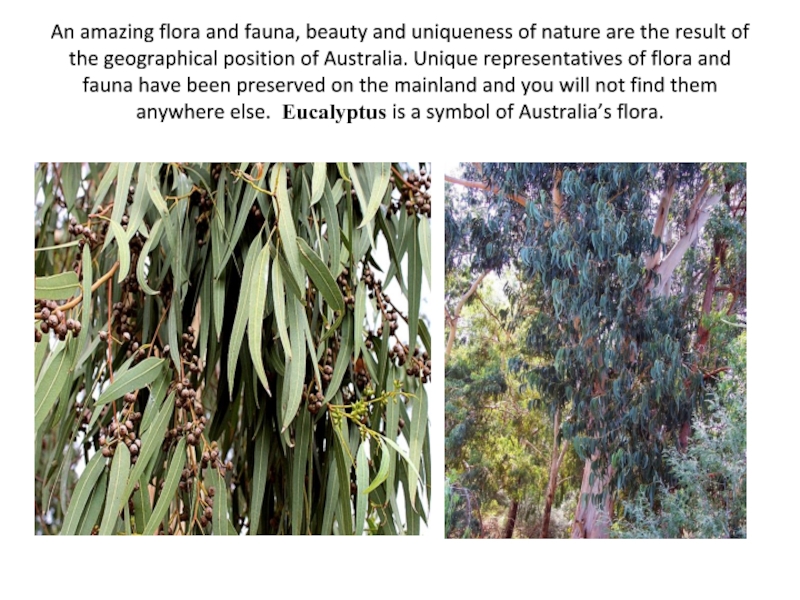 An amazing flora and fauna, beauty and uniqueness of nature are the result of the geographical position of Australia. Unique representatives of flora and fauna have been preserved on the mainland and you will not find them anywhere else. Eucalyptus is a symbol of Australia’s flora. 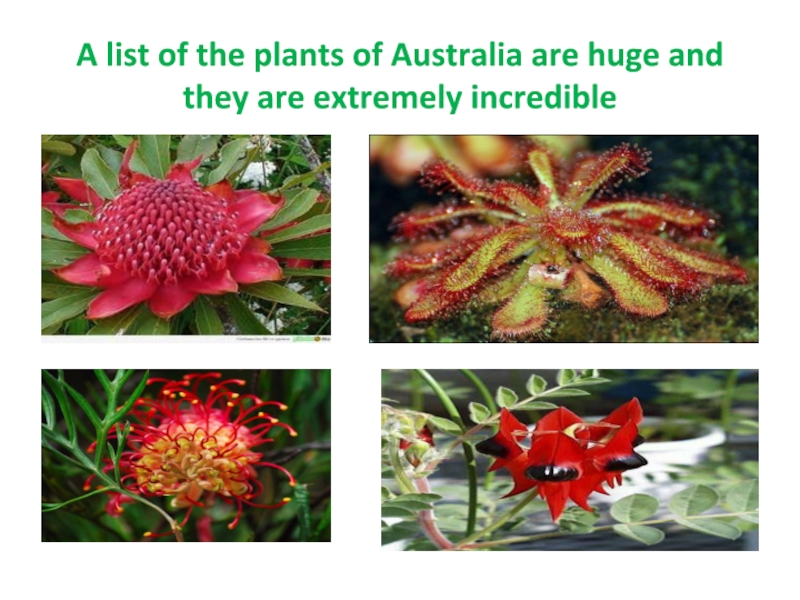 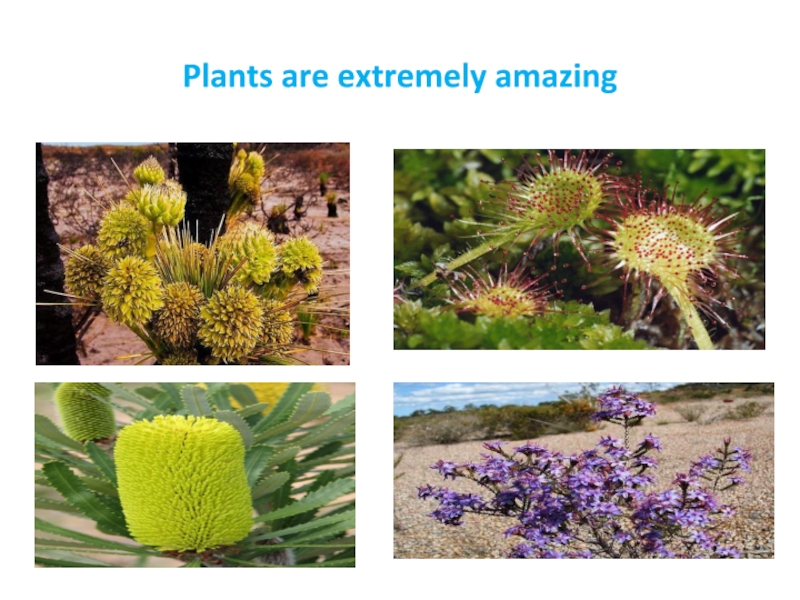 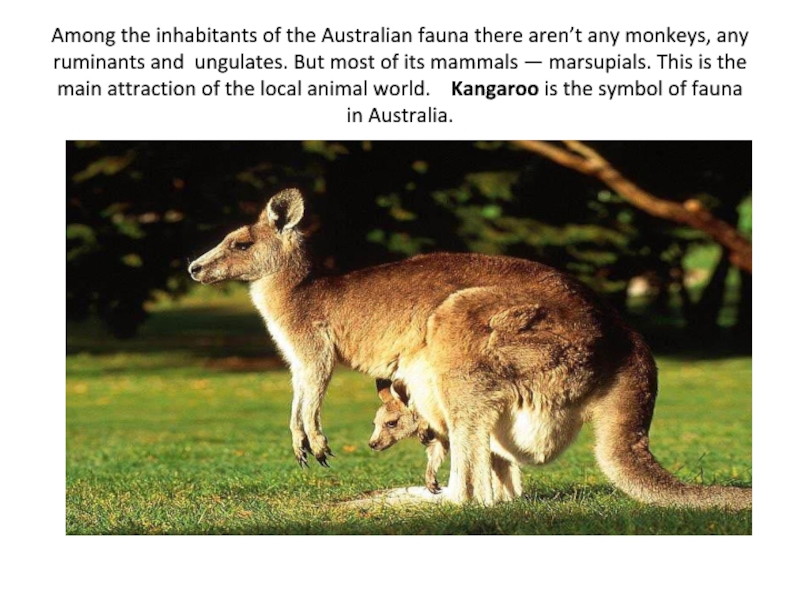 Among the inhabitants of the Australian fauna there aren’t any monkeys, any ruminants and ungulates. But most of its mammals — marsupials. This is the main attraction of the local animal world. Kangaroo is the symbol of fauna in Australia. 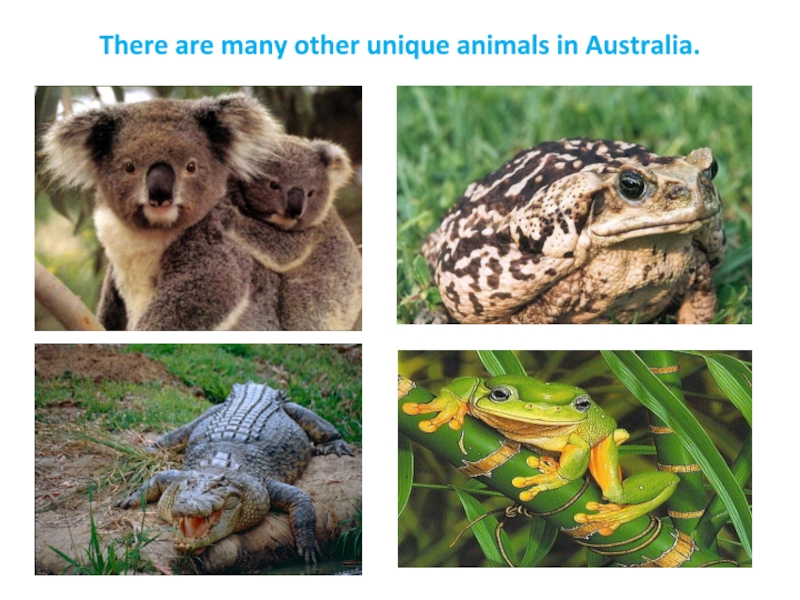 There are many other unique animals in Australia. 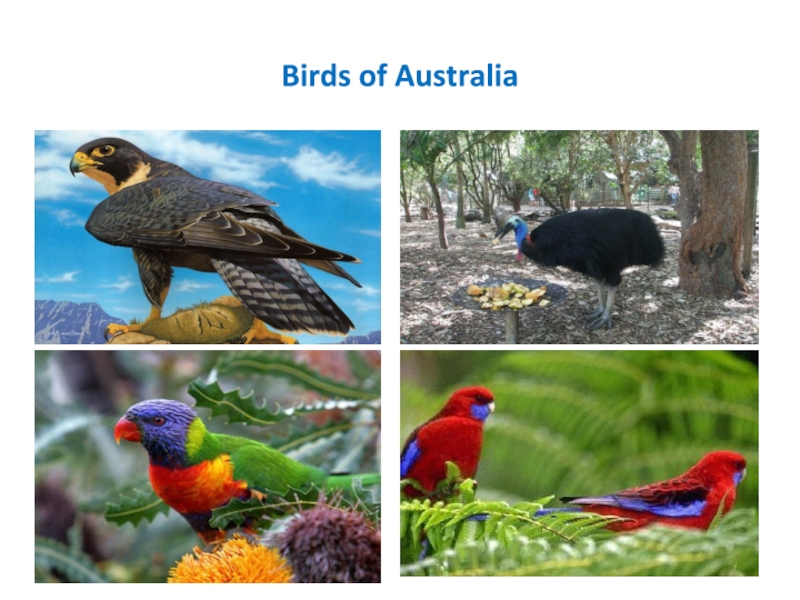 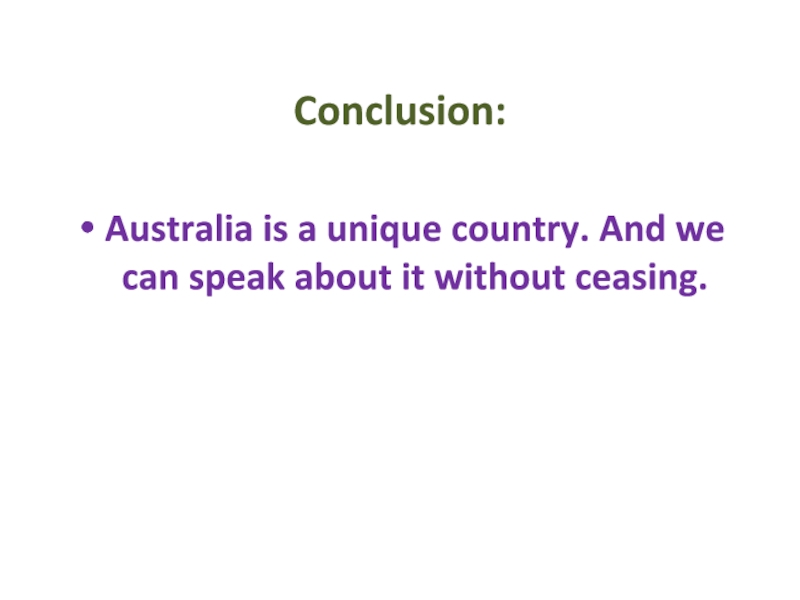 Australia is a unique country. And we can speak about it without ceasing. 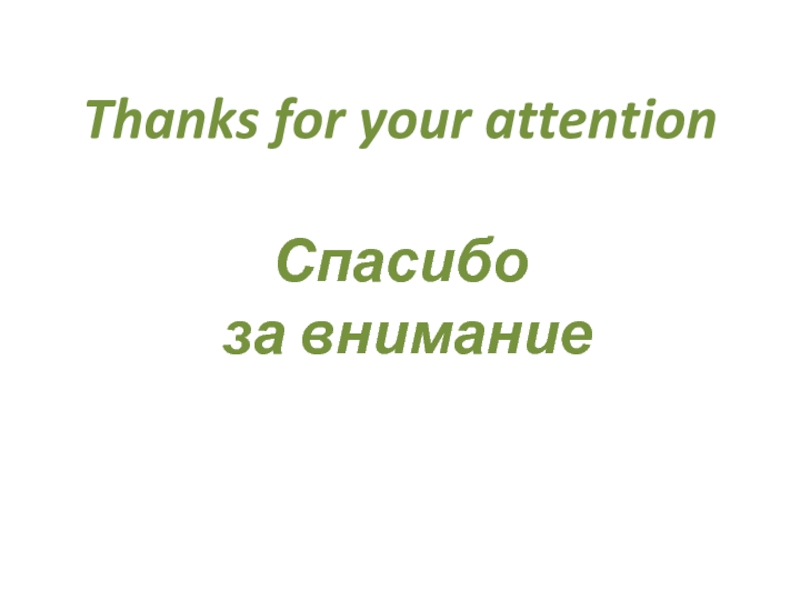 Thanks for your attention Спасибо за внимание 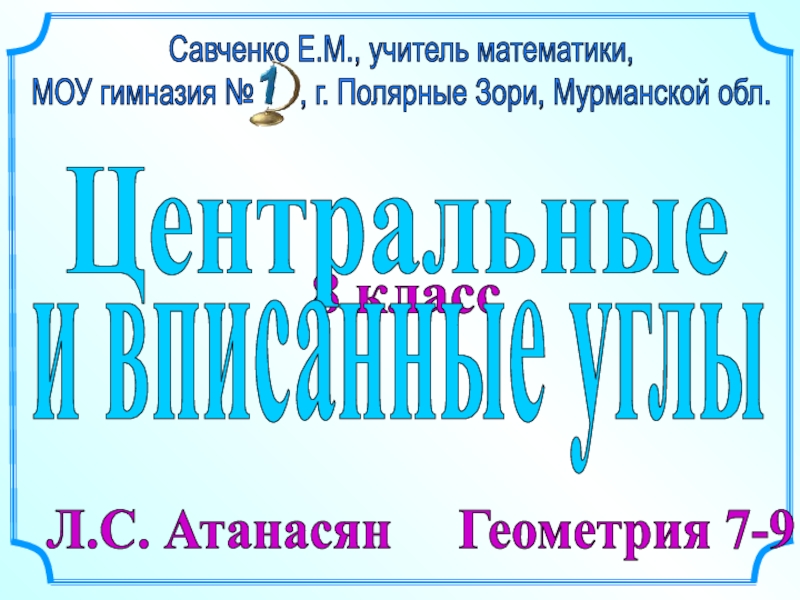 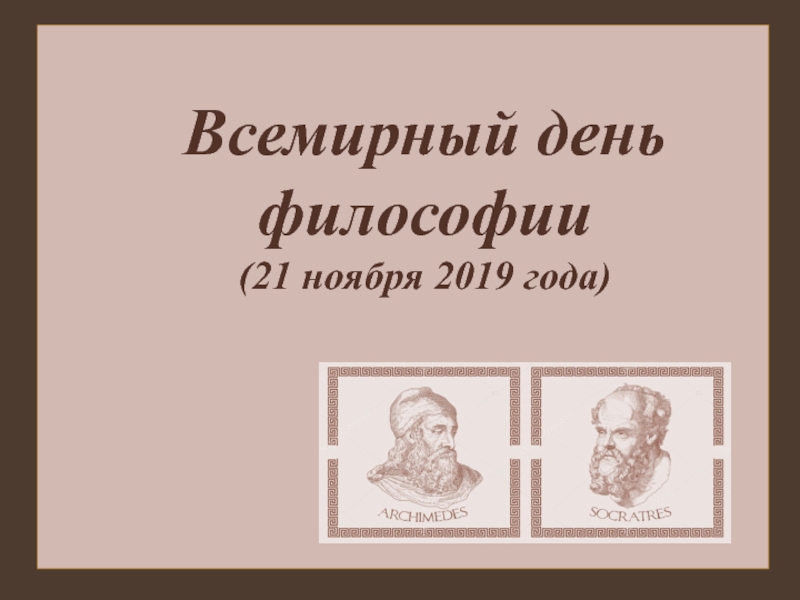 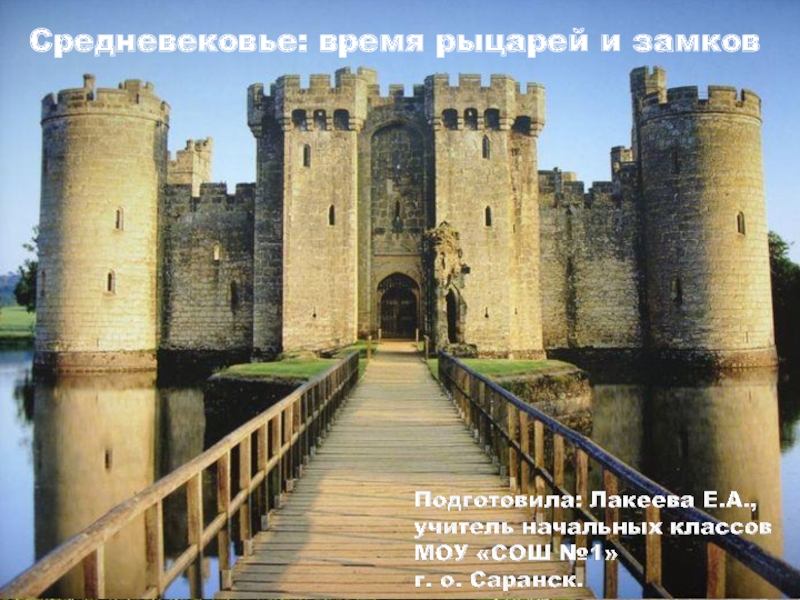 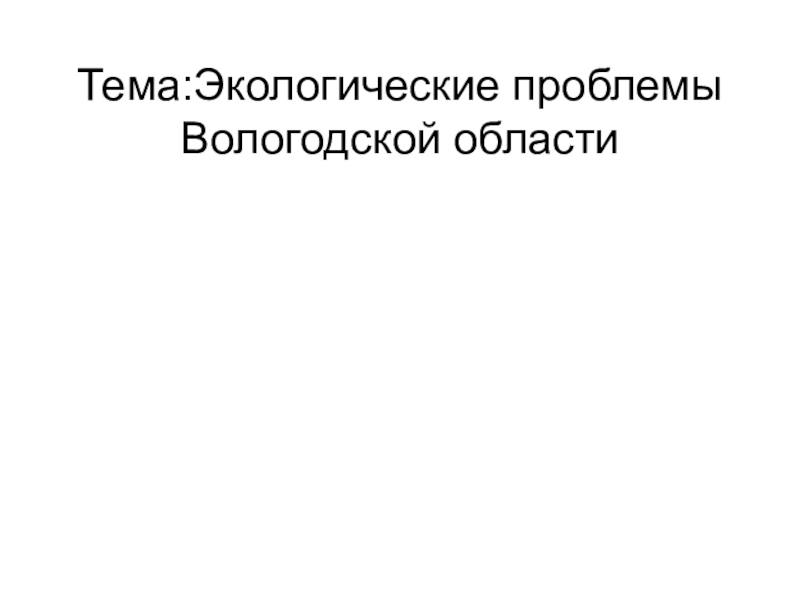 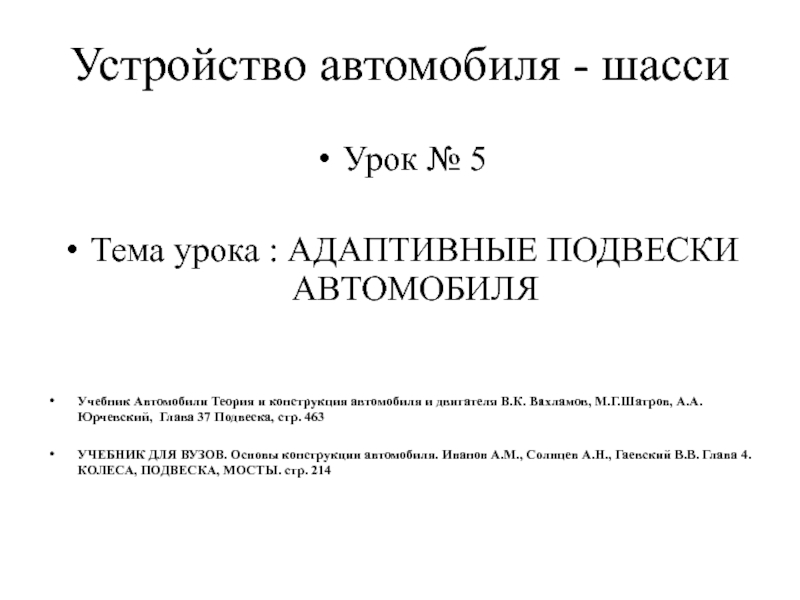 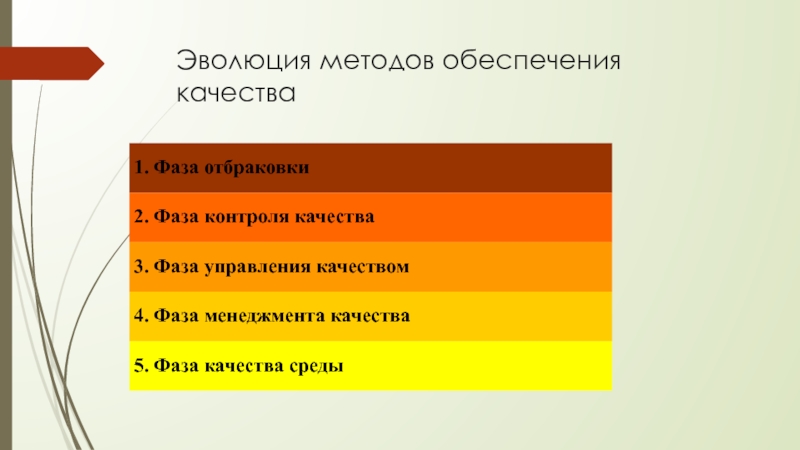 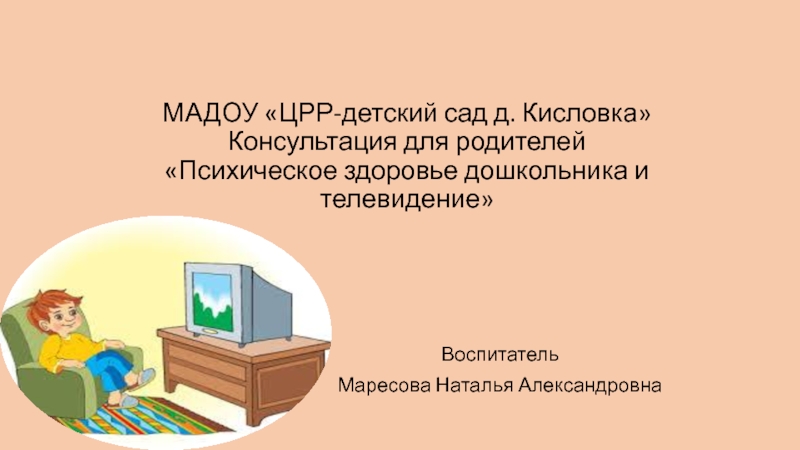 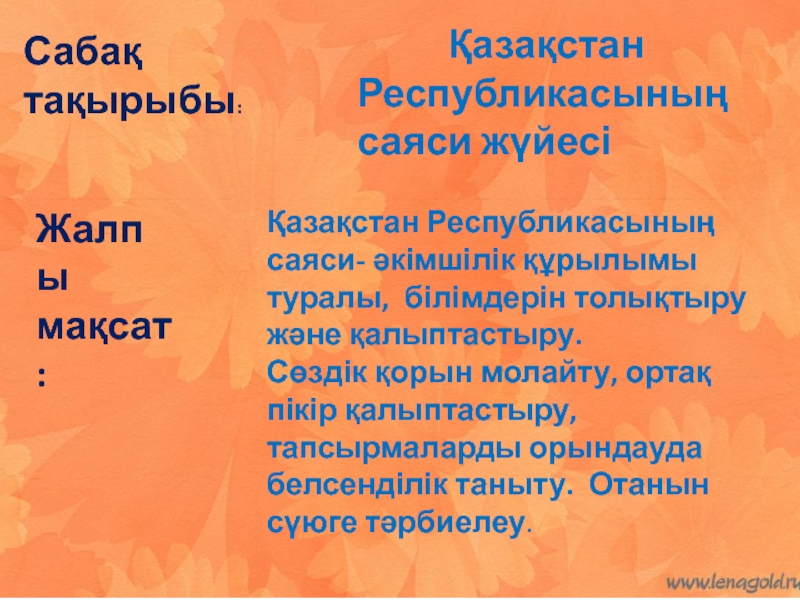